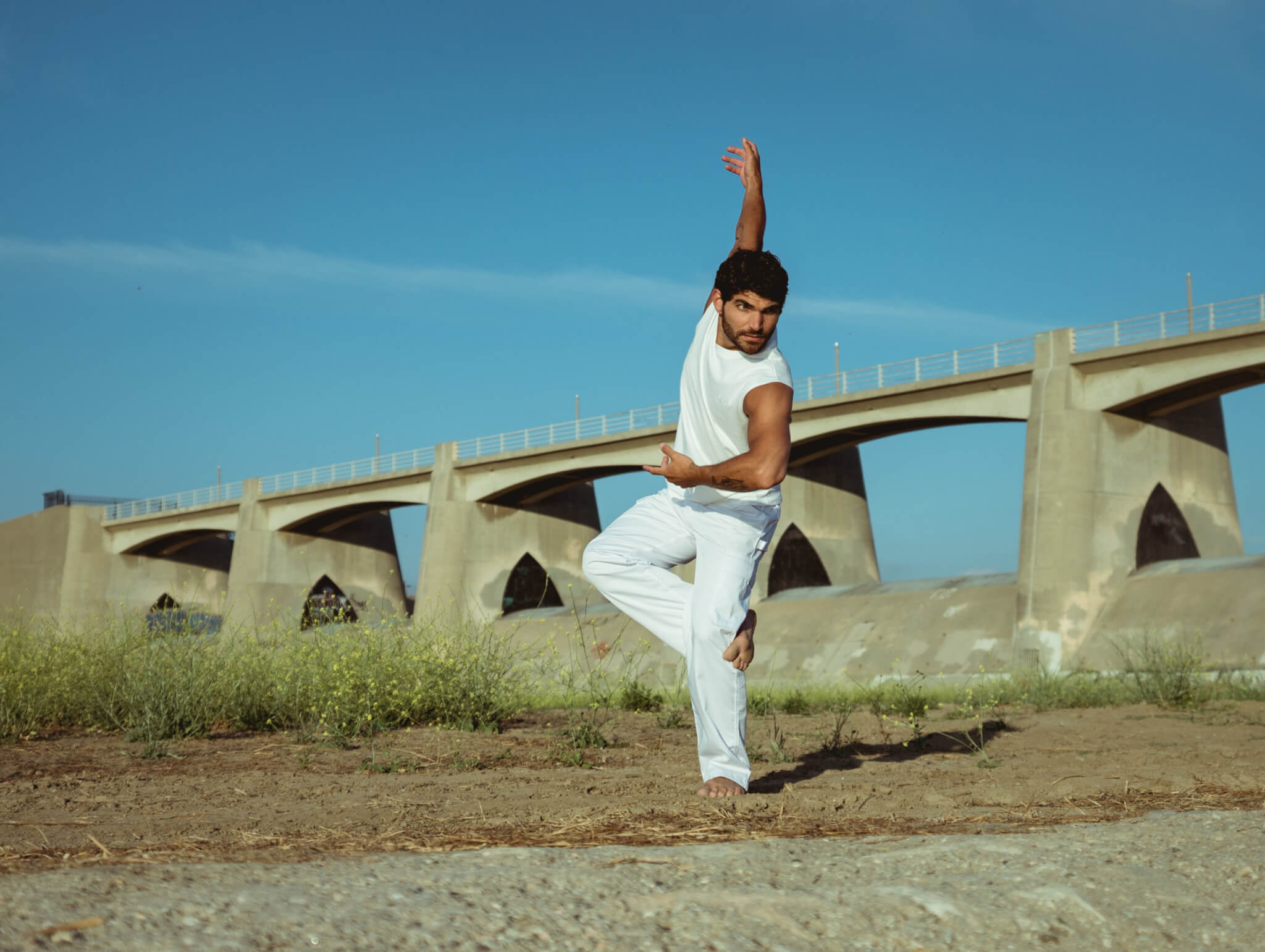 D.C.’s Chamber Dance Project Reaches
Beyond the Stage From Coast to Coast
To Film New Ballets

Filming will be taking place in four U.S. cities for
free online streaming July 31 and September 24

Chamber Dance Project, Washington’s premier contemporary ballet company, presents New Works 2020 (& beyond). Chamber Dance Project reaches beyond the stage—and the expected—to present virtual performance events that showcase our artists with exciting new dimensions of innovation and intimacy. You have the best seats in the house (your own) for a program of new works and repertory favorites performed in outdoor settings across the country.

The free screenings of new works will take place online on July 31 and September 24, 2020. CDP conducted virtual indoor and outdoor rehearsals and performances in four cities with its eight dancers, three choreographers, and a commissioned music score for a new dance film. Three guest videographers worked with dancers in Los Angeles; Columbus, Ohio; and Milwaukee to film the ballets that will be screened on July 31, 2020, at 7:00 pm EDT. Additional cities involved in the production of a new dance film to be shown online on September 24, 2020, at 7:00 pm EDT include Pittsburgh and Washington, D.C. Both screenings will be presented nationally. Reserve a free ticket at chamberdance.org/beyond or call 202-499-2297 for more information.

The ballets are being staged remotely for online streaming and to build new repertoire for CDP’s June 2021 theatre season while ensuring the health of both audience members and performers. In addition to the outdoor shoots with professional videographers, the dancers will be filmed themselves in their homes in their home cities. The July screening, the outdoor performance is at the Sepulveda Dam in Los Angeles and in Milwaukee at an art museum.

“Embracing the new realities of a world living under pandemic, CDP’s New Works 2020 (& beyond) looks to offer audience members a unique and memorable virtual performance experience that they can take to heart every bit as much as if they were seated in a theater. Perhaps even more so, as they will be part of a global audience sharing in the creativity of CDP’s fabulous artists together,” said international arts writer and critic Steve Sucato.

The programming on July 31 includes world premiere screenings of contemporary ballets Berceuse with Luz San Miguel and Davit Hovhannisyan (Milwaukee), Sarabande featuring dancer and choreographer Christian Denice (Los Angeles), and In the Silence with Emmy Award-winner Grace-Anne Powers and Austin Powers (Columbus). It will also include a preview of a new work, Dwellings, created during the July virtual rehearsals.  Preceding the ballets will be a live red carpet pre-show with the dancers, filmmakers, and Artistic Director, Diane Coburn Bruning.

The programming on September 24 includes a world premiere of the new film that will incorporate seven of the company’s dancers and will be a collaboration by the creators of last season’s acclaimed Prufrock: choreographer Diane Coburn Burning, and composer James Bigbee Garver working with award-winning producer and filmmaker David Hamlin. The evening will also include the first public screening of a film made of Exit Wounds with the original cast. In keeping with the positive and creative outlook of CDP founder, Diane Coburn Bruning, there will be another “red carpet” pre-show before the film.

Davit Hovhannisyan is in his seventh season with Chamber Dance Project. | Born in Armenia, Davit Hovhannisyan began dancing at the age of six, and four years later he was accepted into the National Ballet School of Armenia on a full scholarship. At the age of 16, he began his professional career with the Armenian National Ballet Company. After arriving in the United States he received critical acclaim dancing with numerous companies throughout the country and joined Milwaukee Ballet in 2004. He is a principal dancer with Milwaukee Ballet where he is in his ninth season. He has danced many principal roles such as Romeo in Romeo & Juliet, Basilio in Don Quixote, Rudolfo in La Boheme, the title role in Dracula, Oberon in A Midsummer Night’s Dream, Captain Hook/Mr. Darling in Peter Pan, Prince Solor in La Bayadere, Tamino in The Magic Flute, Captain Phoebus in The Hunchback of Notre Dame, Prince Siegfried in Swan Lake, Moon Prince in Scheherazade, Franz in Coppélia, and leads in The Nutcracker, as well as numerous leads in contemporary ballets. Davit has worked with contemporary choreographers including Michael Pink, Stephen Mills, Bruce Wells, Diane Coburn Bruning, Trey McIntyre, Margo Sappington, Kathryn Posin, and Mark Godden, among many others. This is Davit’s fifth season with CDP and he is sponsored by Reina and Brad Brekke.

Austin Powers is in his first season with Chamber Dance Project.  He is a native of Portland, OR, began his ballet training at the age of 5. He trained on full scholarship at Houston Ballet Academy, San Francisco Ballet School, Alonzo King LINES Ballet School, the Center for Movement Arts, and the San Francisco Conservatory of Dance.

Mr. Powers began his professional career in 2014 as a trainee with Ballet San Jose, and the following year was a silver medalist at the Youth America Grand Prix competition. He joined BalletMet in 2015, where he has been performing for 5 seasons.

He has danced original choreography by Cooper Verona, Myles Thatcher, Edwaard Liang,  Matthew Neenan, Dalia Rawson, Mads Eriksen, and Grace-Anne Powers. Some of his favorite roles have been Tybalt in Edwaard Liang’s Romeo and Juliet, 18+1 by Gustavo Ramirez Sansano, Interplay by Gerome Robbins, Symphonic Dances by Liang, Fool’s Paradise and After the Rain by Christopher Wheeldon, Cacti by Alexander Ekman, and Herr Drosselmeyer in Gerard Charles’ The Nutcracker.

He has also collaborated with his wife, Grace-Anne, to choreograph and dance several works for San Jose’s Commons arts festival, and an original production of Amahl and the Night Visitors for Opera Project Columbus.

Grace-Anne Powers is in her first season with Chamber Dance Project.  A Pennsylvania native, she is currently an artist with BalletMet. She began her ballet training at Central Pennsylvania Youth Ballet and continued her studies at The Art of Classical Ballet in Pompano Beach, FL with Magaly Suarez. Prior to joining BalletMet in 2015, she was a dancer at Ballet San Jose, a soloist at La La La Human Steps in Montreal and a principal soloist with the Cuban Classical Ballet of Miami. She has performed a large repertoire of principal roles in the classics including Giselle, Swan Lake, La Bayadere, Don Quixote, Sleeping Beauty, Romeo and Juliet, Carmen, Esmeralda, Raymonda, and Le Corsaire, among others. With La La La Human Steps, she performed in New Work choreographed by Edouard Lock, which premiered in Amsterdam in 2011 and then toured internationally for the following two years. She has also had the pleasure of dancing works by George Balanchine, Jerome Robbins, Edwaard Liang, William Forsythe, Twyla Tharp, Ohad Naharin, Paul Taylor, Val Caniparoli, Dwight Rhodin, Yuri Zhukov, Amy Siewert, Andrea Schermoly, Alex Ketley, Gustavo Ramirez Sansano, Micheal Pink, Matthew Neenan, Alberto Alonso, Jorge Garcia, among others. Ms. Powers has received awards, including the Jury Award at Shanghai IBC in China and a Silver Medal at the World Ballet Competition in Orlando. She was also nominated for Pointe magazine’s “The Standouts of 2018” for her interpretation of Edwaard Liang’s Giselle. Ms. Powers has also been involved in several film projects for BalletMet including “In Tandem” and “Becoming Violet”, for which she received an Emmy Award.

Luz San Miguel is in her seventh season with Chamber Dance Project. | Born in Madrid, Spain, Luz San Miguel received her training at Carmina Ocana Ballet School, and on a scholarship at the Municipal Institute of Ballet in Antwerp, Belgium. Prior to joining Milwaukee Ballet, she danced with BalletMet, Charleston Ballet Theater, Tulsa Ballet, Dresden Ballet, and Leipziger Ballet in Germany. She has performed as a guest artist in Italy, Spain, Switzerland, Belgium, Germany, Portugal, and several cities in the United States. Luz has performed leading roles in ballets by John Cranko, George Balanchine, John Neumeier, Nacho Duato, Anthony Tudor, Stanton Welch, Uwe Scholz, Glen Tetley, Paul Taylor, Lila York, and Jerome Robbins among others. During her time with Milwaukee Ballet, she has performed roles such as Lucy in Dracula, Clara and Marie in The Nutcracker, Odette/Odile in Swan Lake, Kitri and Matador Lady in Don Quixote, Tinker Bell in Peter Pan, Swanhilda in Coppélia, the lead roles in Cinderella, Esmeralda, Romeo & Juliet and La Bohème. Luz is returning for her sixth season with Chamber Dance Project. She is sponsored by June Hajjar and Laura and Randy Moorhead.

In 2000, choreographer Diane Coburn Bruning founded Chamber Dance Project, dancers & musicians in New York with her conviction that dance should be performed with live music, that smaller venues afforded a more intense experience and that sharing the creative process engages audiences on a deeper level. In 2013 she moved the company to Washington, DC.

She has done commercial work for top brands and names including Nickelodeon, People Magazine, Lord and Taylor, and Lladro. She has done theatrical work for Studio Theatre, Woolly Mammoth Theatre, and  Shakespeare Theatre Company. While working at Shakespeare Theatre Company she worked alongside director Michael Kahn, receiving a Helen Hayes nomination for her work on the musical Improbable Frequencies. She has been a guest artist at over twenty-five conservatory and university dance departments including several times for Juilliard and Tisch/NYU. She has been a teaching artist for Lincoln Center Institute and New York City Ballet and has served on many grant panels. Diane directed the Craft of Choreography Conference and helped found the Pacifica Choreography Project; she has led choreographic workshops throughout the country

Graduating with honors from Butler University’s Jordan College of Arts, she later received their Alumni Achievement Award. She holds a Masters in Choreography from NYU and studied composition privately with Bessie Schoenberg and music with Juli Nunlist. For a year Diane studied with renowned designers Jennifer Tipton and Ming Cho Lee on a post-graduate fellowship from Yale University School of Drama.

Award-winning choreographer and Artistic Director Diane Coburn Bruning founded Chamber Dance Project upon her conviction that dance should be a collaboration between dancers and musicians, and that when artists’ share the creative process with audiences, it deepens the audience’s experience. The company commissions and performs new and contemporary works by outstanding choreographers and composers in collaboration with dancers and musicians (who appear together onstage). In past years, CDP performers shared their creative process with open rehearsals; this year’s virtual season aims to provide the same connection between audience and artist. Most ballet companies in the U.S. offer only a 35-38 week contract. Chamber Dance Project hires its dancers during the January and June-July lay-off periods common with other companies, bringing dancers virtually from all over the country to work in Washington DC.

Chamber Dance Project is supported by the National Endowment for the Arts, Bloomberg Philanthropies, DC Commission on Arts and Humanities, KPMG, The Share Fund, Nora Roberts Foundation, and Macy’s.